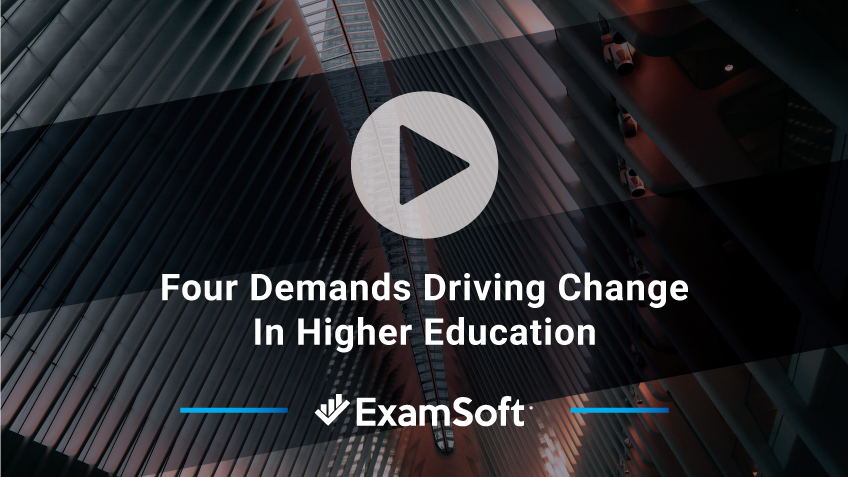 Insights from the EAC 2019 Keynote

The four main drivers of change in education revolve around enrollment, funding, accreditation, and the digital native (i.e. a new type of student). Britt Nichols, ExamSoft CRO, discusses the importance of these four key areas and the impact they have on education from a digital-change perspective.

[00:00:03] And if you think about the main drivers in education and higher education and what’s pushing on us today, there really are four main points enrollment, funding, accreditation and a new type of student. These are the most important things that are pushing us and changing our world right now from a digital change perspective. And so how are we going to adjust to these particular four areas that are that are driving us forward? So let’s just take a look at why I say these are our four main areas and why this is important. And we’ll start with enrollment. And everybody knows enrollment really consists of two things. It consists of recruitment and retention, because ultimately our goal is to graduate those students with knowledge that they didn’t have prior. So recruitment and retention. So if we just start with recruitment, obviously recruitment right now is exceedingly competitive. And when I say that, that’s because birth rates are down. So high school graduates are down. Last year, Hechinger reported that high school graduates are have reduced more than any other year. Previous birth rates have declined from 2008 to 2011. They fell precipitously. I think we had all because of the recession. But actually last year the CDC reported that in the US that it was the lowest number of births in thirty two years. So this declining rate of high school students is probably going to continue and it’s going to be something we’re going have to pay attention to.

[00:01:21] It was a decrease of one point seven in post-secondary enrollment. And from an institution perspective, there are forty two hundred plus degree granting institutions in the United States. What does that mean? Well, if you think about it, there’s 19, 20 million students. So that means that no institution should have more than forty six hundred students. And since we all know that there are plenty of institutions that do have that, that means there’s a lot of competition for those same students. I mean, think about it for a minute. If you were a student and you had forty two hundred choices of cereal when you went to the aisle, there’s a little overwhelming. Right. And students typically make their choice by then the default factor because of that, they say, what does mom want, what is my best friend want or what’s close? And so that ends up being a recruitment pressure. Another pressure is going to be obviously retention. So it can be very difficult to retain students if they’re not engaged. And I think this illustrates that even higher. So 70 percent are expressing a major concern about paying for funding. And if they can’t figure out how to pay for it, it’s oftentimes they don’t actually want to retain on top of that. Fifty seven percent of college freshmen said that the ahli is the most important aspect of why they’re going to college.

[00:02:31] They want to know that that’s going to be a precursor to their career. Again, engagement, very important. Fifty five percent higher failure rate for lecture classes than any other type of engagement class. And yet we still deliver a lot of lectures in giant halls. And that’s not the way people want to learn as much anymore. And so we have to figure that piece out. And this last statistic is one that I think is really jarring at six out of ten students at two year public institutions or for profit institutions, they don’t graduate in six years. They don’t graduate. So let’s look at this a little further. You can see here it’s not much better even for four year public institutions. Sixty six percent in six years don’t end up with a degree. So we’ve got to find a way to keep those students retaining. We’ve got to find a way to help them graduate. We’ve got to find that way for them to move on and move through and learn the knowledge that we’re trying to help them create. So we’re going move on to funding and understand why funding is a real point of pressure for us. I think everybody knows as as we’re all well aware, that funding is certainly an issue in all higher education today. But I think Andy Kaufman said it best when he said there’s only one amount of money, just not enough comedian.

[00:03:44] So this is a we’ll bring it back home here with Ontario for a minute. In Ontario, Canada, the budget proposal to overhaul the university funding over the next five years, 60 percent of the university funding needs to be based on institutional performance. That’ll be radical for for Canada and actually will be, I think, very strong for most universities. In twenty eighteen US institutions provided public universities. They provide them less than a thousand dollars from prerecession numbers. So since twenty six or so for eight years, we have lost that funding and we’re still a thousand dollars less. But at the same time that that tuition per fee has gone up to eighty five point six. So we’re giving the institutions less money, government money, but we’re charging a whole heck of a lot more. And so that leads to the 50 percent discount rate because students can’t afford it. So the only way we can get the enrollment to happen is to discount that. And the discount rate has gone up to 50 percent. And of course, that still leaves us with one point five trillion dollars in debt for students. So if we just look at this discount rate, you can see over the last 11 years how it has climbed precipitously from thirty eight percent to 50 percent. It’s just continued to rise and unfortunately, it actually doesn’t seem to be stopping, but I think more troubling is the is the amount of debt that students are incurring right now, student debt.

[00:05:13] And forgive me if I’m belaboring a big warning sign here, but student debt is increased over just the last eight years to one point five trillion. It is higher than credit card debt. It is higher than auto debt. And the prediction is that the next 10 years, it will actually surpass mortgage debt. So this is a real challenge and something that as entities we have to understand, we have to figure out and we have to come to a conclusion on this. The default rate is actually also the highest on student debt to 12 percent, which is higher than any other loan rate as well. Just to just to beat this dead horse, two point seven million borrowers, excess of one hundred thousand dollars, 20 million borrowers in excess of twenty thousand dollars. And you can see as you break this down, it’s significant. So funding is clearly one of our cardinal points, one of the areas we have to pay attention to. And we have to see if our assessment and our data can address accreditation. I think everybody knows what a creditors do. They apply a nice amount of pressure. Right. But as the Scottish philosopher Thomas Carlyle once said, no pressure, no diamonds. So it’s important they’re squeezing you in their vise.

[00:06:21] They’re keeping you there, but they’re not trying to crush you. They’re just trying to make sure you’re performing and getting better all the time. But what does that do for us? Well, one of the things about accreditation is there’s also a focus on increased Leisinger pass rates. So. Fifty four percent of educating of educators actually failed the practice on their first try, 15 percent of nurses failed the inflects on their first try. So we’ve got to try to get those pass rates a little higher. And in fact, for the first time ever, the bar passage rates dipped below seventy five percent. And so what did the ABA say? They said graduates of law schools over within two years, you have to have a seventy five percent pass rate inverse accreditation action. So this is increased as well. Ninety five adverse actions across the accrediting bodies for schools last year. This is just to give you an idea. SAC’s went from 10 the year before to 16 last year. So it’s increasing. They’re putting pressure. They’re applying. This is pressure to you and this is pulled from each one of their their stats. So accreditation is a constant battle that we face. Nothing new, but it’s still one of the pressures that is on us. And then, of course, we have the digital native. This is a new type of student. This is not just a millennial. This is anyone who grew up with a cell phone.

[00:07:39] This is anyone who grew up with a laptop, a computer. They think these things are normal. Some of us remember a rotary phone. Some of us remember a payphone. Some of us remember any kind of phone that had a cord to it. They do not write. They don’t even remember the magic Commodore. Sixty four. It’s it’s mind boggling to me. But these are people that technology is inherent in what they do. And so subsequently they expect that technology when they come to the classroom. A frightening statistic. Yes. Eighty three percent of people of students admit to falling asleep with their cell phone. Yeah, and this is a study by by Mark Prensky where he said the average graduate by today, they will only read five thousand hours in their life. They will have had ten thousand hours of playing video games and twenty thousand hours of watching TV. So clearly, how they’re digesting the data has changed that information for them and how they’re how they’re imbibing that very different. The good news is that Nielsen has reported that this is the most diverse student population in US history, challenging because we have to figure out how we teach to everyone, but important because it’s nice to see that we’re finally having a diverse classroom talking a little bit more about the digital age. So if they’re falling asleep with their cell phones, what are they expecting? Well, I’m going to quote queen for a minute.

[00:08:59] They want it all and they want it now. Right? It’s it’s the age of immediacy. If I say, oh, my gosh, I forgot something. Let me just go on Amazon. It’ll be here tomorrow. There we go. I need my lunch. Let’s just order that through through Dorda Shrader. I forgot my dry cleaning. TaskRabbit can help me out. No problem. Here we go. Click, click, click. That’s how they’re engaging and they’re doing it through all the various digital mediums that are available to them. Even more importantly, they’re seeing ratings and reviews that’s scoring and rationale. That’s what that is. Right. So they’re saying, wait a minute, I’m going to go on Amazon. Five stars. Yeah, OK. We don’t need to read those reviews. Oh, wait, I didn’t like what this person said. I will tell you that we actually have a in my house, we have something called Nichols’ Family Rules. One of those is don’t buy commercial property, but don’t buy residential property near commercial venu. Another one of them is don’t buy anything that has less than three stars off of Amazon and less than fifteen. So I am I am in this category now as well, even though I’m certainly not a millennial, so. It’s changing, how they’re engaging is changing, and we have to figure that out.